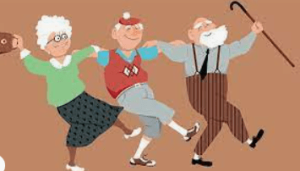 Dance to the Music
By Michael McFarland

I could sure use your company now
But don’t be mistaking my smile
I’m only in between dances
Sitting it out for a while © Universal Music Publishing Group, Bluewater Music Corp.

The above lyrics are from the song “In Between Dances” by country singer Pam Tillis. They indeed hold true now with the new strain of COVID. Many of us wish to get back to the dance floor. However, it’s time to let it all out and dance at home! Why? Dance, in fact, has such beneficial effects on the brain that it is now being used to treat people with Parkinson’s disease.

Scientists gave little thought to the neurological effects of dance until recently. Researchers have begun to investigate the complex mental coordination that dance requires. In Scientific American, a Columbia University neuroscientist suggested that synchronizing music and movement—dance, essentially—constitutes a “pleasure double play.” Music stimulates the brain’s reward centers, while dance activates its sensory and motor circuits.

At the Osher Center for Integrative Medicine at Brigham and Women’s Hospital, Dr. Peter Wayne, assistant professor of medicine, studies the clinical effects of mind-body and complementary/alternative medicine practices on patients with chronic health conditions.

He has conducted clinical trials designed to evaluate the safety and efficacy of tai chi for patients.

Dr. Wayne considers tai chi a more ritualized, structured form of dance. “The focus of our work is to take advantage of traditional exercises in which it’s implicit that the mind and body are connected more efficiently,” says Wayne. “Tai chi is one such exercise that we focus on because of its benefits for both balance and mental function.” Research, he says, has shown that the increased susceptibility to falls that occurs among people who are aging or who are dealing with disorders such as Parkinson’s can be mitigated by the practice of tai chi; it improves their strength and flexibility as well as their cognitive performance.

There’s room at my table; why don’t you pull up a seat?
The music’s inviting, but I’m staying off of my feet © Universal Music Publishing Group, Bluewater Music Corp.

This entry was posted in RICHARD's desk. Bookmark the permalink.