And who speaks for him… 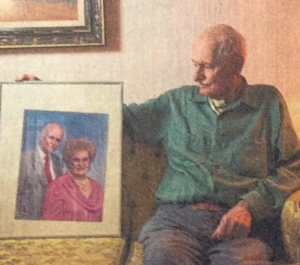 Stories such as that of Fred Rieser really trouble me, maybe even anger me. Is the only recourse older people have is the judicial system with a lawsuit.

The Toronto Star editorial uses Rieser’s sad story as the backdrop for an editorial underlining how care for the aged need serious revision in our society, in our country and in our province.

Long lives must also be worth living

They were, he says inseparable for 59 years of marriage. 84-year-old Fred Rieser is suing a Niagara Falls long-term care home saying that staff did not include him in discussions about his wife’s pneumonia treatment before she died.

In the four days between her diagnosis and her death last February Rieser told Goffin that no one – including the Millennium Trail Manor physician – spoke to him about Alma’s treatment. Understandably, Rieser believes that his input such as recommendation for care might have saved her life.

Blocked from advocating for Alma, who suffered from Alzheimer’s disease, Rieser is right to speak on an issue that is sadly commonplace in Ontario long-term care homes.

His brief also speaks to a wider reality: Ontario has an aging society with rapidly rising dementia rates. The Alzheimer’s Society of Canada says 564,000 Canadians have dementia with another 25,000 cases diagnosed every year. That means families and friends increasingly tasked with the oversight of resident care – and good communication is key. It’s also a legal requirement.

Informed consent for medical treatment is mandatory by the province and the College of Physicians and Surgeons of Ontario. Both must do a better job of holding incommunicative medical staff to account.

As well, the Health ministry must ensure that families are properly educated about their rights – including the rights of residence (and their substitute decision-makers) to ” participate fully” in the development and revision of their own plan of care. It’s pretty straightforward.

Ongoing Star investigations into long term care homes have detailed multiple cases of families who were not informed about serious health problems from pneumonia to deep, infected pressure ulcers.

Lori Derkvor, for example, filed a the lawsuit against Rivera, one of Ontario’s largest care-home chains, claiming that she learned of her father’s leaking pressure ulcer after visiting him in hospital – not from repeated conversations with staff at his Toronto nursing home. He died, in agony, a short time later.

This lack of communication leaves families emotionally devastated, wondering if their input could have made a difference in keeping their father, aunt or grandmother alive. At the very least peaceful death instead of suffering. It’s traumatizing.

Legal Advocates Jean Meadus says lack of communication is one of the biggest problems in long-term care where many doctors and staff “operate on the premise that they know best.” A lawyer for the Advocacy Center for the elderly Meadus says “families can’t understand why the home isn’t calling if there’s a fall or a bad illness. It ends with people being very upset.” She’s right about that.

Ageism probably plays a role too. Meadus says some staff, believe that since residents are old and sick they are going to die, may be less than they ought to be.

To be fair, Ontario homes are working hard to improve connections with residents and families. A few strong leaders are creating a culture where greater attention is paid both to residents and their relatives. To state the obvious, that creates a more positive experience for everyone.

If Rieser wasn’t able to advocate for his wife at the end of her life, his lawsuit could serve the dual purpose of holding the home accountable and exposing an important matter of public interest. After all, the elderly are among our most vulnerable citizens. As Meadus points out society wouldn’t allow daycare teachers to ignore parents’ input with young children.

Communication matters, whether individual is in a care home or still living in the community. The Ontario government has been pushing an aging-at-home strategy for people with dementia, which is welcomed by David Harvey, chief public policy and research officer for the Alzheimer Society of Ontario.

Community care needs improvement, too. The current home care system is rigid, Harvey says. Healthcare workers arrive with a “list of things that I do and don’t do.” Creating a system that responds to individual needs could make life in the community easier for the elderly- and their caregivers.

Making the needed adjustments for an aging population goes beyond Queen’s Park. Despite years of lobbying Canada still needs a national dementia strategy. But, groups like the Alzheimer Society of Canada say momentum may be shifting.

A federal private member’s bill pushing for a strategy is up for the third reading. And last fall, Senate Committee on Social Affairs, Science and Technology called for a national strategy so all Canadians have access to good care and choice and where they receive it.

After years of focus on clinical outcomes for the elderly, there’s a growing awareness that if life can be extended, it must also be worth living. Programs, whether in the community or long-term care, must adapt and allow residents what Harvey calls the “dignity of taking risks.”

That’s why provincial and federal decision-makers must listen to people like Fred Rieser, whose lost opportunity to advocate for his wife has exposed the need to talk about change. Communication is good. And it’s long overdue.

As sad as the Reiser story is, I cannot discard the feeling of anger that I feel. I have been working with older adults very actively for the past 7 years and I am beginning to think the time for talking, complaining and criticizing should stop. As Obama said in a parting speech, pick up a clip board, start a petition, call your MP, your MPP, and/or your local councillor. Start a movement yourself.

If you see a wrong being done somewhere, are you going to let it pass? Find the energy, even if its to write a letter, write an email. But get indignant, get bothered, get irritated and do something. You’re important and you can make a difference but you wont if you just sit there and moan about it.

You still are a valuable part of society unless you no longer want to be. Speak for others. Act for those who no longer act for themselves. Do something that matters. Many people will appreciate your effort even if they may not be able to tell you.