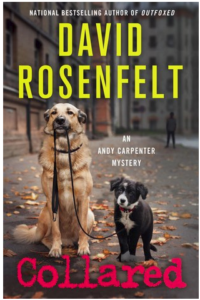 Fermo doesn’t read much. But occasionally, even he will sniff at a book wondering if it might be worth his while.

When he saw this cover, he couldn’t pass it up. The temptation was too much. 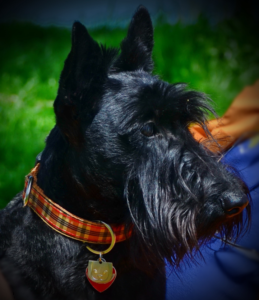 Lawyer Andy Carpenter’s true passion is the Tara Foundation, the dog rescue organization he runs with his friend Willie Miller. All kinds of dogs make their way to the foundation, and it isn’t that surprising to find a dog abandoned at the shelter one morning, though it was accompanied by a mysterious anonymous note. But they are quite surprised when they scan the dog’s embedded chip and discover that they know this dog. He is the -DNA dog.-

Two and a half years ago, Jill Hickman was a single mother of an adopted baby. Her baby and dog were kidnapped in broad daylight in Eastside Park, and they haven’t been seen since. A tip came in that ID’d a former boyfriend of Hickman’s, Keith Wachtel, as the kidnapper. A search of his house showed no sign of the child but did uncover more incriminating evidence, and the clincher that generated Wachtel’s arrest was some dog hair, notable since Wachtel did not have a dog. DNA tests showed conclusively that the hair belonged to Hickman’s dog. Wachtel was convicted of kidnapping, but the dog and baby were never found.

Now, with the reappearance of the dog, the case is brought back to light, and the search for the child renewed. Goaded by his wife’s desire to help a friend and fellow mother and Andy’s desire to make sure the real kidnapper is in jail, Andy and his team enter the case. But what they start to uncover is far more complicated and dangerous than they ever expected.

Fermo says
Would I recommend this book? That’s a tough call. Obviously, as I don’t read much, I am not really one to recommend books. I was drawn to this book because of the jacket photo depicting two dogs, breeds that I know first hand.

I had a next-door neighbour Goldie called Tobie. He was a terrific dog, friendly to a fault. He would greet anyone and everyone with a tail wag which would knock things over in the house. But he was never overly eager in his greetings. He never jumped on people, never knocked people over with his enthusiasm. He would just come up to them, that tail waggin’ like an unleashed metronome beating out a ferociously fast beat. “I’m here. I’m here!”

The other dog on the cover, I have the opportunity of making friends with a dog of that breed. The dog looks like it is a pup, likely a collie of some sort, a shepherding type, maybe one of the Australian sheepherding breeds.

Oh, about the book, oh yeah!

The author, David Rosenfelt, is trying to channel Mickey Spillane who had great success with his detective stories with the character, Mike Hammer. Rosenfelt tries to write in the Spillane style, flippant, sarcastic, quick with quips, second thoughts. But it doesn’t work because the style must be contained throughout the book. It cannot be turned off and on like water at a faucet.

The Spillane channelling detracts from the story. It’s like static on the radio smattering and sputtering intermittently while the station tries to play a piece of music. It wrecks the music. And for Rosenfelt, it wrecks his story.

The story, well, what there is of one. I found the story confusing and bewildering too often. Maybe I just wasnt drawn into the book enough. Possible as the writing style is distracting rather than attracting.

But each chapter, all very short which something I really like in a book, left me hanging and wondering, ‘OK, what’s next? What now?’

In short, the book was a good escape, especially if you like dogs, though they do not play a big role in the story. Rosenfelt continually brings his dog company to the forefront of the story but doing so has no purpose.

My final word
It’s an OK read if you like dogs. As a crime novel, it colours within the lines but the colours don’t grab ya. They should have hired a couple of barkers to tout the book more !

Not really worth recommending but it will pass the time.