CONSERVATIVES have a campaign communications problem

Informational rather than a criticism
We have no intent of criticism or attack on the Conservative Party. It deserves as complete and full consideration by voters as does every other national party in the election campaign.

However, the Conservative Party should be notified of this communications problem. If we, along with a large public institute, have difficulty in connecting with the party, there is no telling how many other potential party supporters have been unable to connect with the party. 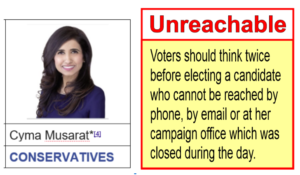 This communications failure may have numerous explanations: the party is innundated with contact requests, there is a digital glitch in the party’s communication system, the connectivity link to the Conservative party is broken, human error in interoffice communication.

Who knows where the communications process breakdown has occured? We can only hope that our contact with the national headquarters bears some fruit in the repair process and quickly. We spoke with agent Malcolm who was most attentive and helpful. The agent stated that he would forward a message through his communication system to our local candidate.

The campaign is in its final three days. We doubt we will be hearing back from anyone in regard to this communications gap as it is the weekend. However, we can only hope that should the Conservatives successfully move on to the next step in the election process, that they resolve this communications problem.

After all, we do want our federal government to hear us when we try to communicate with it.

This entry was posted in EDITORIALS, VOTE2019. Bookmark the permalink.