Some people love him, some hate em.

I suspect the haters come from the green camp of ‘envy.’

The latest opus from Dan Brown will have you grabbing for your iPad, smartphone or tablet repeatedly. 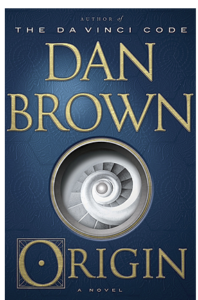 Synopsis
Robert Langdon, Harvard professor of symbology and religious iconology, arrives at the ultramodern Guggenheim Museum in Bilbao to attend a major announcement—the unveiling of a discovery that “will change the face of science forever.” The evening’s host is Edmond Kirsch, a forty-year-old billionaire and futurist whose dazzling high-tech inventions and audacious predictions have made him a renowned global figure. Kirsch, who was one of Langdon’s first students at Harvard two decades earlier, is about to reveal an astonishing breakthrough . . . one that will answer two of the fundamental questions of human existence.

As the event begins, Langdon and several hundred guests find themselves captivated by an utterly original presentation, which Langdon realizes will be far more controversial than he ever imagined. But the meticulously orchestrated evening suddenly erupts into chaos, and Kirsch’s precious discovery teeters on the brink of being lost forever. Reeling and facing an imminent threat, Langdon is forced into a desperate bid to escape Bilbao. With him is Ambra Vidal, the elegant museum director who worked with Kirsch to stage the provocative event. Together they flee to Barcelona on a perilous quest to locate a cryptic password that will unlock Kirsch’s secret.

Navigating the dark corridors of hidden history and extreme religion, Langdon and Vidal must evade a tormented enemy whose all-knowing power seems to emanate from Spain’s Royal Palace itself… and who will stop at nothing to silence Edmond Kirsch. On a trail marked by modern art and enigmatic symbols, Langdon and Vidal uncover clues that ultimately bring them face-to-face with Kirsch’s shocking discovery… and the breathtaking truth that has long eluded us.

Origin is a travelogue, like taking a trip with Arthur Frommer or Rick Steves, renowned travel writers. Dan Brown’s book is a travelogue of southeastern Spain, the Barcelona region, visiting all the touristy spots. The book makes it a lovely journey.

Origin is a history book describing different ages in Spanish history. For history buffs, the story digs into the Spanish past, discovering new aspects of old history with Brown adding another layer with his story.

Origin is a denunciation of old time religion. Religion is man’s tool for dealing with the unexplainable, his crutch to support him in dealing with the unfathomable, his foil as he swashbuckles through life with the unanswerable. The book debases all religions as being coping mechanisms for the unbearables facing all men in life.

Origin is a story of technology trumping faith, reaching lofty heights with new answers, replacing the old deities with new ones which deserve the full allegiance and unbridled faith given to religions before.

This was a terrific book because it engages the reader in a playful dance, read a little, discover something (a phrase, a location, name) and now google it to visually admire what was just read.

The book beams a rainbow of Spanish history on the reader, its glory and its decline: the age of the Roman Catholic counter reformation under Philip II, builder of El Escorial, the era of the infamous anti-semitic and anti-Moslem persecution by the Inquisition, the decades of autocratic government of Francisco Franco, the beautification of the nation by artists and writers of the 19th and 20th century, Gaudi, Miro, Guastavion, Dali, and the present where Spain has developed into a modern democracy despite years of horrific civil war and the oppression of a totalitarian fascist regime.

The good…
Origin is a fun read if you like history served as a platter of enjoyable morsels of examination. Brown offers views of historical facts with a twist, with a new view, with a variation, making each a morsel of delight for the reader.

Brown likes to play with the reader, using italics like a scalpel dissecting well known names, places and facts. Italics is a tool to jar the reader’s attention, an jarring it needs as Brown’s prose somnambulates with its ongoing and endless wording.

The book is fun because it lays out concepts and ideas which have become old stalwarts from years of repetition and use. We take them for granted, accept them as is, as fact, and never question their veracity. Brown does. He presents the other side, the other view, the other consideration.

The story…
A billionaire intellectual has discovered what he believes are answers to the age old questions troubling mankind: Where did we come from? Where are we going? The millionaire plans to televise his answers globally to as many viewers as possible. His assassination at his presentation sparks a chase between Robert Langdon, the symbolgist and the established authorities, a chase with twists and turns unfolding to the last chapter.

Recommendation?
This can be a troubling book to read, pedantic, repetitive, cliched and pedestrian. But permitting yourself to bask in Brown’s prose and you will enjoy the book immensely. Recognize that Brown is playing with you, playing with history, facts and reality, and you enjoy the ride. An inexpensive tour, a nice trip.