Residential fire…confirm your home is safe

A low toned thudding noise coming from somewhere beyond the backyard woke me up this morning at a little after 4:o0 am… 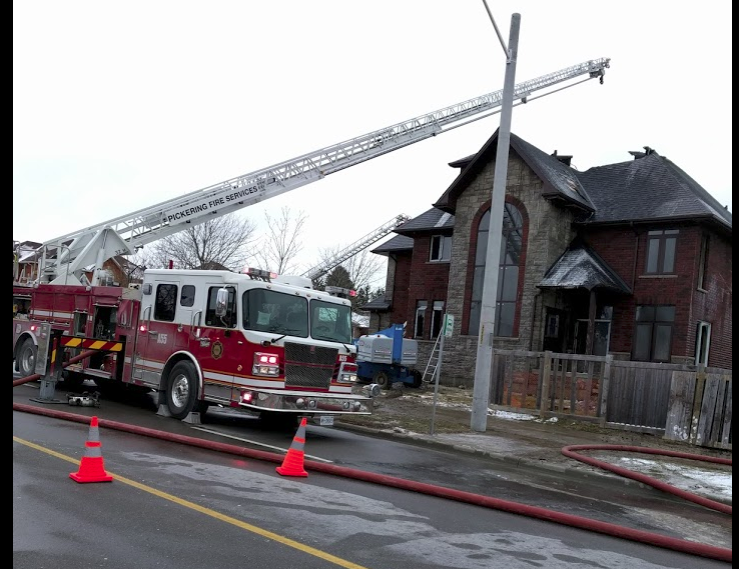 I woke up from a nice sleep. “Smoke. I smell smoke.”  I immediately jumped from the bed and began sniffing for the source. No alarms had gone off, anywhere in the house. I thought, “Stove, I may have left something in the oven after making supper last night and forgotten to turn off the oven.” I rushed downstairs into the kitchen. The stove was completely off, the oven too. Yet, there was still a waft of smoke smell in the air and the thudding noise in the back was still thumping away.

I drew apart the blinds of the patio door to give the back yard an exploratory glance. I spotted some flashes of orange or red and billowing grey-white smoke 4 yards away at the back of one of the newly constructed million dollar homes. [House prices in the GTA are absurd for sure!] My still groggy mind concluded that there was a fire back burning away back there. I immediately phoned 911.

“I’m in Pickering.” The dispatcher asked, “On Fiddlers Court?” He responded to my affirmation, “We’ve got trucks there and everything is under control. But thanks for calling, you did the right thing.” As it was only 4:40am, I went back to bed figuring everything was OK as far as what I might be able to do.

Later in the morning, Fermo and I decided to walk down the street to assess the situation. Five fire trucks, 2 of them pumpers, ladders fully extended, were pumping water on the newly contructed home at the end of the street, it’s windows blown out, its garage door with areas melted by intense heat. One pumper truck was still gushing water into the house through an huge gash in the roof burned open by the fire.

I walked up to one of the firecrew and asked about the fire. Firemen do not assess cause of fire but leave that to the crew trained for that this crewman explained. He was one of the early responders and said the situation was well under control at this time, the fire totally extinguished.

An interesting comment this firemen, errr, fireperson said in regard to my saying these fellows really earn their salaries in doing the work that they do. His response was that they all were aware of the danger but that he would bet that not one of the “guys or gals” would trade their job for another. Darn gratifying to hear this but I think this man was not trying to be politically correct or gender equal. He sounded more like he was showing equal respect to  every fire fighter out there, male or female and not thinking of being politically correct.

In any case, the million and a half dollar home (asking price) was now a gutted shell. Investigation and insurance action will likely see the home sitting in that condition for a year or more, maybe closer to two. We have seen this kind of response in another fire occurrence a few streets away. More than two years before reconstruction was finally started.

The moral of the story: if you smell smoke when in bed, act on it immediately, call 911 without hestitation and check around quickly. Maybe it’s also a bit of a reminder to double check if your fire and smoke detectors are all in working order with updated batteries.

This story ends well. Though property damage was extensive,  no one was injured. Only Fermo and I froze in the winter morning cold. Thank goodness it was a wintery night/morning in temperature only and not snowing or storming.

And the thudding I heard? Probably the pumper trucks’ engines pumping water to extinguish the flames coming out of the roof. 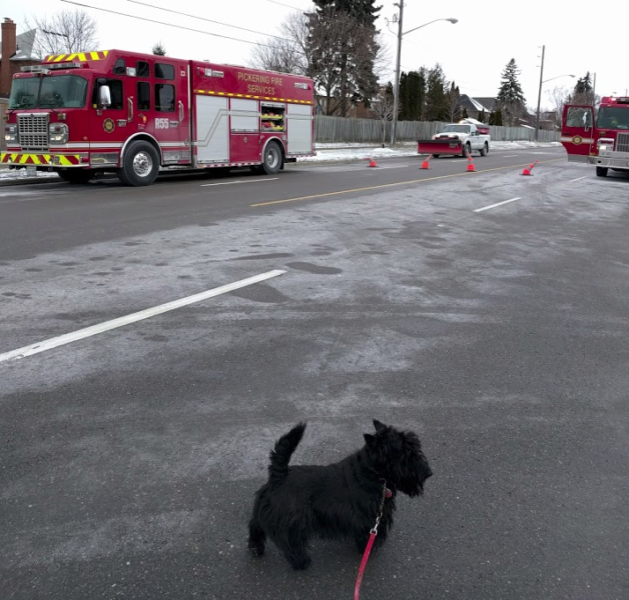 Fermo has never been a firetruck chaser ! And still isn’t.

More photos
More photos from the fire which burnt out soon after the firefighters arrived shortly before dawn. Click the arrows at the sides to move the slides.