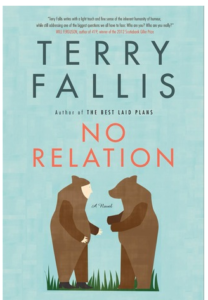 Terry Fallis, Canadian humourist, raconteur and writer, came to the PROBUS PICKERING meeting, Wed., Jan. 28th, and conquered the members…with his humour, his story telling, his tales of misnamed people.

“No Relation” is Terry’s last publication and he described what the book was about to the members who gleefully enjoyed his recounting of the story. Earnst Hemingway is nisnamed, in the sense that he is a writer, but not THAT writer and so he suffers uncountable numbers of incidents where he runs into problems because of the naming problem. When Earnest loses his wallet and must apply for a new driver’s license is worth the cost of the book alone.

The run of bulls of Pamplona while Earnest is trying to outrun the yappy pomeranians is hilarious. Every Probus member could picture the Spanish event in all its excitement and Fallis’ variation of it in all of its comedic humour.