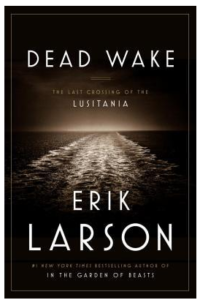 If reading historical tales embellished with interesting people, gripping dialogue and exciting events, Larson is you author. Each of his books develops the story behind the headlines with incredible research, captivating narration and superb plot development. His stories never lag; his protagonists always intrigue; his descriptions ceaselessly captivate. Larson is the master of the historical novel. He turns every historical event about which he writes into an intriguing and captivating story.

Dead Wake may be the epitome of Larson’s work. Unquestionably, it is a superbly written story which will entertain, educate and excite anyone who has heard of the Lusitania.

The Lusitania sailed out of New York May 1, 1915. She was the elite ship of the Cunard Lines, the ‘greyhound’ capably of outrunning any other ship of the time. This trip’s passenger list was lengthy, but very notably, it included a record number of children and infants among the nearly 2000 people. Germany had just recently posted a maritime warning that neutral ships might be attacked if they navigated war zone waters. The Germans believed that these neutral ships often carried military supplies, especially if they were bound for British ports. Less than ten percent of the passengers were American. The majority were British.

Larson’s story ranges across many logical and expected topics.

He talks about the ship itself; its size; its outstanding features; its embarkation and its opulence. One is reminded of the Titanic and it is a suitable comparison though this ship was more opulent. The Titanic’s fame rested on its advanced technology, that it was ‘unsinkable.’

Larson’s story unfolds like the steps of a dance, step and counter step; the Lusitania; the Uboat 20; Captain Turner, Kplt. Schwieger, the opulence of the Cunard liner, the dingy, frightening squashed encapsulation of the uboat.

The Atlantic crossing at near record speed has a romantic tone to it with descriptions of the passengers, how they dined, how they were pampered and cared for by the crew members specially trained to be attune to the desires and wishes of corporate elite and upper class people.

As the ship nears the Ireland, headed for Liverpool in the North Channel, suspense builds. Larson develops the suspense with his ‘behind-the-scenes’ descriptions of Room 40, the secret department created by Britain to intercept and decode German naval communiques. The well-known Winston Churchill is introduced a one of the commanders in charge of the department’s operation. He is coloured as being ruthless, cold and dedicated to victory at all costs. ‘Damn the torpedoes!’

Larson evokes more tension to his story by short stories about other ships being destroyed. The British Admiralty’s command to all military vessels ordering them to not come to the rescue of any attacked vessel is particularly ominous for it meant the Lusitania, once she had been attacked, was on her own. She sank in a record 18 minutes. Nearly a 1000 passengers died.

A very intriguing and plausible subplot is that there could have been a conspiracy to sink the Lusitania to bring about the entry of the United States into the war. Larson introduces the idea but really doesn’t pursue it much. Yet, a cynical or suspicious reader, a believer in conspiracies might easily be attracted to the idea, especially as the British Admiralty withheld the facts about the sinking to safeguard the secrecy of Room 40. 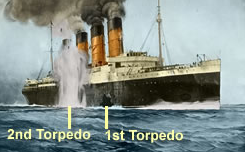 Kplt. Schwieger logged only ONE torpedo. The British did not correct the inaccuracy because they wanted to safeguard the secrecy of the decoding department.

The tale of this renowned maritime disaster doesn’t end with the ship’s sinking. It continues with the aftermath, the burials, follow ups of the lives of some of the survivors. However, the sadness of the story is highlighted and developed throughout the entire book.

The title, “Dead Wake” is the name mariners and naval combatants used to describe the white trail of foamy water that follows a ship as it travels in the ocean. It also was the name given to the similar white tail caused by a periscope of a submarine as it stalks its naval prey.

Larson is a master writer, without reservation. He is a maestro with the written word, creating the appropriate phrase, ending the paragraph perfectly. He leaves the reader wanting more and more. One can imagine his audience like concert goers, shouting “Bravo! Bravo! Encore! Encore!” throughout his story.

Additionally, one is hard pressed to find another non-fictional writer whose research goes deeper than Larson. His research depth is stunning: bibliographies, personal letters, corporate and naval communications, historical documents, movies and even the internet. His research not only includes historical sources but current, modern day ones too such as ‘uboat.net’ on the internet. Again, he spares no energy in digging into the story behind the story.

The book has an appendix and a very useful index to assist the reader in referring back to particular aspects of the story. The appendix has interesting excerpts in it which Larson felt would not enhance the story and so he rejected their inclusion in the story proper. Yet, he felt they were worth making note of in the appendix. Very respectful of his readership to not overload the story with endless trivial minutiae.

The book ends. This enthralling story, written superbly and edited and polished by a professional who seems very dedicated to writing the best story he can, is captivating and entertain from the first paragraph to the last. The disappointment comes that the story ends. It somewhat like attending a buffet with the finest prepared foods possible and being too full to not eat more. 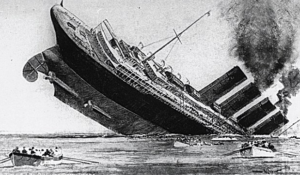 If you are a fan of history novels with romance, excitement, suspense and tension, Dead Wake is a must.