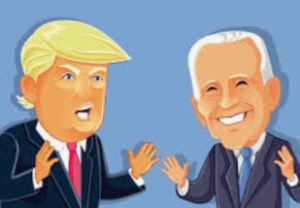 A search in “SEARCH BOX” using ‘Trump, democracy’ will display the numerous times we have warned about Trump and how he is a destructive force who will erode and destroy America, not just democracy but American society.

The first presidential debate demonstrated the total toxicity of Trump.

Joe Biden seems to be a man who is respectful and deserving of respect. He receives none from Trump. Why would he, it is an election campaign after all. However, Biden seems to be the kind of man who has respect for everyone and conducts his life in that mode. Meet him in a bar, and he likely could talk to you about many things held in common. A family man, married to one woman only, for a long time spouse; has children that he respects, loves and adores; law abiding; pays his taxes properly. A discussion with Biden would never devolve into a shouting match, never become sardonic and sarcastic, never denigrating and disrespectful. This man seems like he could be the ideal of a man, a husband and a father.

Trump on the other hand….what can one say, except that his toxicity is the Midas touch of malevolence. His touch turns the touched into the dark side, into black, into ruin.

Minutes into the presidential debate of Sept 28, 2020, Biden was transmorphed into an angry, retaliating, disrepectful and insulting man, a politician who began displaying an ugly side never evident at any time in his normal life. How did this happen?

Perhaps Biden’s devolution was due his feeling of being too restricted by  the rules of the debate. No interruptions; allow the opponent to finish; act with decorum and respect; abide by the rules. Perhaps found this rules boxed him in and so he became angry and lashed out at his opponent. Ya think?

Perhaps it was the university atmosphere? Too academic?  Perhaps the COVID limited audience? Not enough open support for Biden, so he became angry and unleashed by the oral collar he was forced to don. Ya think?

It had to be one, if not all of the above factors which transformed Biden from the gentle, respectful and considerate man he seemed to have been into the arrogant, bombastic, angry, offensive and insulting ogre of this debate. No doubt, the man who called his opponent “a clown,” the man who blurted out, “shut up,” must be an evil, bullying, aggressive political thug.

What is America becoming when such a man becomes a leading candidate for the presidency? What has this great nation, this world model of democracy become. It is a sad reflection of where the once great USA is today. Is Biden to blame for this sad state of affairs?