A HOUSE IN THE SKY, Amanda Lindhout 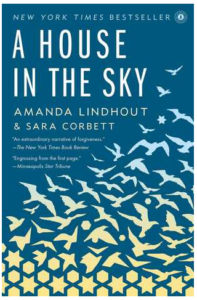 Synopsis: GOODREADS.com
The dramatic and redemptive memoir of a woman whose curiosity led her to the world’s most beautiful and remote places, its most imperiled and perilous countries, and then into fifteen months of harrowing captivity—an exquisitely written story of courage, resilience, and grace.

As a child, Amanda Lindhout escaped a violent household by paging through issues of National Geographic and imagining herself in its exotic locales. At the age of nineteen, working as a cocktail waitress in Calgary, Alberta, she began saving her tips so she could travel the globe. Aspiring to understand the world and live a significant life, she backpacked through Latin America, Laos, Bangladesh, and India, and emboldened by each adventure, went on to Sudan, Syria, and Pakistan. In war-ridden Afghanistan and Iraq she carved out a fledgling career as a television reporter. And then, in August 2008, she traveled to Somalia—“the most dangerous place on earth.” On her fourth day, she was abducted by a group of masked men along a dusty road.

Held hostage for 460 days, Amanda converts to Islam as a survival tactic, receives “wife lessons” from one of her captors, and risks a daring escape. Moved between a series of abandoned houses in the desert, she survives on memory—every lush detail of the world she experienced in her life before captivity—and on strategy, fortitude, and hope. When she is most desperate, she visits a house in the sky, high above the woman kept in chains, in the dark, being tortured.

Vivid and suspenseful, as artfully written as the finest novel, A House in the Sky is the searingly intimate story of an intrepid young woman and her search for compassion in the face of unimaginable adversity.

Either Lindhout/Corbett co-write a very readable book or the story is so inherently suspenseful, almost any author could have composed this very captivating(!) story.

I think this story may be CBC news reporter Melissa Fung’s story but she was too slow off the mark. Still the book is very engaging, the story very suspenseful and the intensity never really lets up.

Every reader will find the story intense, frightening and gripping. Every page seems to have a hook which pulls the reader along to the next page.

Wow, this is terrible…what? It gets worse? How? And then the story gets worse, Lindhout’s situation becomes worse. Just when you think that’s it…it becomes worse again. A terrible situation, described superbly.

Lindhout and Corbett do a great job writing a story about a young woman with a travel bug, a travel itch which finds satisfaction only with itineraries to destinations with danger, locales populated by locos, places of explosive potential. And Lindhout tickled her fancy with increasingly more dangerous sojourns after each safe return home.

Labelling her as being “nuts” is a curt dismissal. She does not have a death wish; she isn’t out to tempt fate; she is not out to skirt the edge of personal fatality. She is sincerely curious about danger, disaster and dystopia. Once she sees journalism as potential for paying for her wanderlust, she is off and running. It all becomes a vicious circle: the more dangerous the setting, the greater likelihood of selling the story. So each tour becomes more threatening, laden with more danger and more potentially personally catastrophic.

After chapters of frightening descriptions about her capture and captivity, a reader cannot help but become somewhat inured or hardened to the ever more destructive and dangerous situations to which she is subjected. The repetition hardens the reader or the reader steels themselves to the worsening conditions. Certainly, even the most patient reader must be hoping for an end to the endless atrocity and torture.

Ploughing on, even the most hardened begins to wish for an end to it all, though only the most callous would wish for anything other than escape.

Escape she does, this doesn’t occur until page 353 in a 361 page book. Incredible!

Anger and revenge or the desire for vengeance are the negative emotions which sit in my craw, even now after finishing the book.

As I get older, I am becoming more and more angry with men, extremism, religion and racism. Examine almost any example of an injustice, a war zone, a place with social chaos and the leaders are one of the above. Sunnis vs Shiites, religion; Muslims and terrorism, religion; Palestinian and Israeli, religion. If it isn’t religion, then try the racism shoe: Nigger, Jew, Wop, Dago, Spic, …fit? Society is getting worse, pushing the envelope of titillation and sensationalism…try 9/11, ISIS, Charlie Hebdo, Sandy Hook Elementary school, San Bernadino…it never ends…and it likely never will. Not until men no longer lead nations…but watch out here…the devil could be in the details. Women are now joining these forces of evil. They too wear the suicide bomber vests, carry AK47s…so the evil is swaying the maternal…how sad. Is it becoming a race as to who will prevail…pacifist feminity or powerful political and sociological forces which are pervasive and dominate our society today. Add poverty to the mix, indescribable, hopeless, starving poverty and maintaining peaceful societies becomes impossible.

Obviously, I cannot speak from experience living here in relatively quiet Canada. I don’t know hunger (no smart remarks called for here). I am not financially destitute. I know where my next meal is coming from…what it will be is not dependent on luck or fate, but on my own initiative and what I feel like cooking. My bank account is not empty. I can pay my bills. I am debt free. Now take all those things away from me, and maybe I will become like those Somalians. Maybe…but not likely, at least not likely in a single decade, or a single generation. But what if the negative conditions become relentless, repeated decade after decade, generation after generation. Would I be transformed into a man capable of indescribable evil. I would like to think it is not possible…I fear I may be wrong.

So where are we headed? Consider…Donald Trump for president; Kim Jung-un with a hydrogen bomb; the panning of the movie “The Interview”…evil seems to be growing in might, in power. Fewer and fewer woman have real power. That society is acknowledging and recognizing women more and more is lip service. Any woman in power faces overwhelming obstacles, male bastions of power undermining her every move. Sadly, it seems violence only begets violence. My first reaction to Lindhout’s captives was that they should be shot, executed, killed. I am a product of my own society !

This entry was posted in RICHARD reads reviews and tagged books, house, sky. Bookmark the permalink.