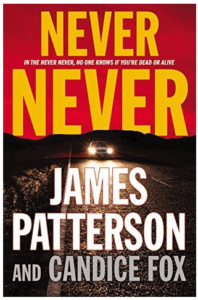 When Sydney police department sex crimes detective Harriet Blue is called into her boss’s office, she never imagined it would be to tell her that her brother is the prime suspect in the brutal murders of three women.

Shocked and in denial, Harry is transferred to Perth to avoid the media exposure this case will attract. Harry is sent into the outback – the never never – to investigate the disappearance of mine worker Danny Carter. The mining town is a seedy place, full of money and immoral ways to spend it. As Harry delves deeper into the murky lives of these miners, she finds that Danny isn’t the first to go missing.

Richard’s comments
The synopsis of the story is more appealing than the actual book. The summary makes the plot sound suspenseful and attractive but in reality, the book plods along with sporadic bursts of readability, soon followed by lapses into reading doldrums.

Our chief protagonist, Detective Harry (Harriet) Blue, is a reputable cop but because of the accusations against her brother as a sex predator and the inevitable media scramble, her boss decides it is better to ship her off into the never never lands of the Australian outback so the news hounds cannot readily find her.

Harriet is sent to a mining region where a miner has been reported as missing. A discovery of a body part leads to even more discovery, that two more miners have been killed in brutal ways.

With bursts of suspense and tension, the plot moves along sporadically. Harriet carries out her investigation with a newly assigned partner. She has suspicions that Whitt, the new partner, is actually a plant by her police employers as they try to learn more about her brother and the acts of which he is accused.

The mining town turns out to be a corrupted, morally deprived site with prevalent drug abuse, illegal drinking and resident prostitutes plying their wares.

Criticisms cannot be made about the writing, the plot, or the development of the story. That the book has been planned in a structured way is obvious and for this, the co-authors deserve positive acknowledgement.

However, there are lapses in the suspense, far too often. There is confusion as the authors try to elaborate on the unravelling action. Tension builds with attempted killings compounded with even more tension when Harry is the target. But the confused writing detracts from the build up of the suspense.

Whitt and Harry are misled by the actual killer numerous times and become his targets more than once. Ultimately, there is a believable resolution to the story, though the outcome of the brother’s criminal accusation is handled in an awkward and unrefined way.

Recommendation
Never Never is not a polished detective story. It is confusing and at times, boring read. The plot is credible but it is developed in an erratic manner causing boredom and distraction unless the reader focuses really hard and works at reading the book.

However, the plot is appealing and draws the reader in. However, the attraction is unstable and not steadfast.