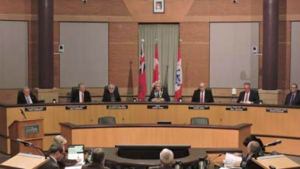 The Dec 12th Council meeting at City hall was a lively one.

However, one councilor stood out from the rest for the questions which he asked. Maurice Brenner should be applauded for questions which had constituent interests as their first priority. He asked the Ontario Power Corporation.

The Ontario Power Corporation delegates were asked how their proposed rate increases would impact on tax payers hydro bills. He pushed the point that he feared any rate increase would affect residents adversely. Unfortunately, the reply from the OPG representative was smoke and mirrors and so hydro rate increases and their impact on residential hydro bills was was never clearly explained.

Ward 1 constituents should be proud of how Councilor Brenner kept their interests at the forefront of every question he asked. When the Canadian Nuclear Energy Commission delegate spoke about the nuclear generating station in Pickering, Councilor Brenner prodded with a query as to how the public were informed about their meetings. He probed further explaning that he felt his constituents would likely be interested in attending any public meetings relating to the plant license renewal and its operation. He further pushed for how the federal commission published information about their meetings and their forums.