My fear just wont ease up !

I am not the only one who is frightened. 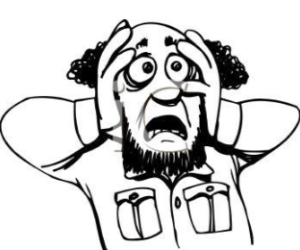 Thirty-six percent of responders replied that they feared the future in the United States. Some people may be even more paranoid; society may be justified in its fear.

Election was hated
An incredible number of Americans hated the election. They could not get it over with soon enough. Look at what bothered them, some of which may be even more worrisome when analyzed more deeply.

Obama’s popularity
Obama’s personal popularity was never transferable. It couldn’t be transferred to his party, his party’s candidates nor to Clinton. Why not? Why couldn’t the popularity of this black man spill over anywhere?

A powerful campaign
Clinton ran a campaign for all ages, organized, efficient, expensive, energetic and strategically well planned. But she didn’t get the votes and certainly, she didn’t get the electoral voters votes. Why didn’t she ?

Oh, the “special thanks” award should go to FBI director James Comey. Way to go big fella! You reopen a closed case, 11 days before the vote, and then close it shortly after saying there was really nothing criminally chargeable there. Please don’t be in a theatre where a patron lights up a cigarette. The response to your cries of “Fire! Fire!” might kill someone. Oh yeah, not to worry. You could simply cancel the shouts.

But here are some worse fears for your consideration.

Mysogyny?
Eleven women claimed to having been violated by the president elect. All eleven must have been lying, right? And that bus, locker room talk video…nothing to worry about, right? After all, it was just talk. Didn’t the white house already have a resident groper ( to be politically correct) ? What now? What does it mean for our society when the leader of the free world is blatantly mysogynistic? No one in society would view the president as a role model, would they?

Racism?
The president elect campaigned on the platform of closing the borders to all Muslim immigrants. He labelled Mexican immigrants as drug traffickers, rapists, illegals and more. Impressionable minds wouldn’t be impacted by this, would they? No one would parrot such sentiments, would they?

Build a wall?
Segregation to an extreme, don’t ya think? No retailers would see this as model for retail sales, would they? Just because the president can claim it is right, doesn’t make it so, does it? And in the US of A, as we are all equal, anyone else can do it too, no ?

White people still matter
White people are still a significant force as confirmed by the overwhelming white turnout. It’s doubtful they were listening to the message trumpeted during the campaign, “no more Muslims will be permitted to enter the United States?”

Secrecy, the new norm
Secrecy may become the new norm? The president elect withholds public disclosure of his tax returns. Why? Is there something he doesn’t want the public to see? Oh, it’s none of their damn business. I get it. Well, looks like a good idea, no ?

Lie, lie lie
Lie to beat the band. Clinton was guilty of some falsehoods during the campaign. She was really trumped by the other guy, incredibly. But he put a new twist to lying. Be bold, be brash, be boastful, be blunt. If you fake it enough, you’ll make it anyway. Amazing! So maybe the “fake it till you make it” policy might work for others? Should it be tried?

The final word
Let’s not jump to any premature conclusions. Let’s give everyone a fair chance. There’s no real merit to “a leopard can’t change it spots!” A wolf in sheep’s clothing may not really be a wolf! Let’s watch and see.